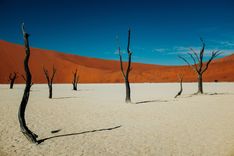 Namibia is a unique country with a remarkably large area and sparse population. Combining that with the government’s strong aspirations and readiness to modernise local e-services, the way was paved for implementing an interoperability and secure data exchange solution – the UXP (Unified eXchange Platform). The overall aim was to improve interoperability and service availability by more profound data exchange and digitalisation of governmental services.

Cybernetica implemented the e-Government interoperability system Nam-X for the Namibian Government in cooperation with e-Governance Academy. The development of the solution started in 2015 and was based on the improved Estonian data interoperability layer, the X-road (the UXP). The project was implemented as an initiative under the leadership of the Office of the Prime Minister of Namibia with six governmental organisations participating in the pilot phase.

The Office of the Prime Minister took an instrumental role in promoting e-governance solutions. The government of Namibia established a clear vision and strategy for e-government and implementation of an interoperability and secure data exchange platform based on Cybernetica’s experience of delivering the X-road in Estonia. Despite of high motivation and a positive mindset, the main issue was fragmentation between different types of information systems and a siloed operation – challenges which can be overcome with the UXP.

The cooperation between the governments of Namibia and Estonia dates back to the early 1990s. In fact, Namibia was the first of many to come state-level partners for Cybernetica in Africa. The motivation to modernise governmental systems in African countries deserves to be recognised – in addition to Namibia, we have supported Tunisia and Benin in their endeavours for launching effective e-governance solutions and are consulting several governments in their efforts.