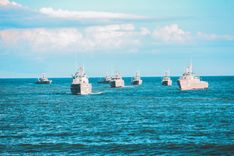 European Defence Agency (EDA) and Leonardo signed grant agreement
today for OCEAN2020, the first ever cross-European military research
program, in consortium with Cybernetica in order to boost
European defence capability with next-generation naval surveillance
technology. The program adjoins partners from 15 countries
and is set to last for two years with the first operational
demonstration taking place in 2019 in the Mediterranean Sea.

OCEAN2020 is issued by the European Union under the Preparatory
Action on Defence Research (PADR) programme and is the first initiative
of European Defence Fund. Cybernetica is the only participating company
from Estonia, chosen from 180 organisations across Europe.

According to the Ministry of Defence of Estonia OCEAN2020 is a historic
milestone for the European Security and Defence Policy. „European
Defence Fund has an ambition to reshape the landscape of innovation
and competitiveness of European Defence industry. Having Estonian
company as a part of winning consortia is clearly a good news,
but even more so – a manifest of state-of-the-art capabilities
of Estonian industry.“

„We are highly proud of this result, as the project carries immense
strategic value for the whole region,“ says Oliver Väärtnõu, CEO of
Cybernetica. „OCEAN2020 is set to boost Europe’s defence capabilities
and the participation of Cybernetica emphasises the level of Estonian
defence industry. We are glad for the strong collaboration between all
the 42 consortium partners, but particularly grateful over the
cooperation with the Ministry of Defence of Estonia.“

OCEAN2020 is set to boost technological research in the naval domain to
establish next-generation naval surveillance technology. The project
will see unmanned platforms of different types integrated with naval
units’ command and control centres, allowing for data exchange via
satellite, with command and control centres on land. In addition to
complex simulations, the project involves two live demonstrations of
maritime surveillance and interdiction operations, the first scheduled
to take place in 2019, coordinated by Italian Navy.